A downloadable game for Windows

A Mashup of Pac-man and Monopoly, created for 8 Bits to Infinity ~ Mashup Jam

The game is turn-based. Player and four (4) enemies takes turns to roll a dice and move the amonut dice will give.

Player's job is to collect all houses toi win. Each house gives $1.
There is a 3% chance that on every move player makes, one of the uncollected houses will give player $5 upon collecting it. This only lasts 3 full turns.

Player have 8 different "Power Ups", some of them can kill enemy/enemies, some gives huge adventage to the player. Player can buy power-ups for $10 each.

Enemies can kill player. However, they never try to follow the player due to their 100% randomized movement.

Each enemy have a hotel presented with the same color. If player kills an enemy, player may conquer its hotel, causing the enemy never respawn again. Also giving player $5

If player dies 6 times, the game is over.

Power-Ups
1.  FREE ROLL, player can roll dice twice in a row.
2. MELEE, enemies can't kill player, instead player kills enemy. Lasts one full turn.
3. SHIELD, enemies can't touch the player, however this counts as player's turn.
4. BULLET, shoot a bullet in chosen direction. Killing an enemy instantly if hit.
5. BOMB, place a bomb under the player. If enemy touches it, it will explode. Killing EVERYTHING in 3x3 area.

MAY STILL HAVE SOME BUGS! 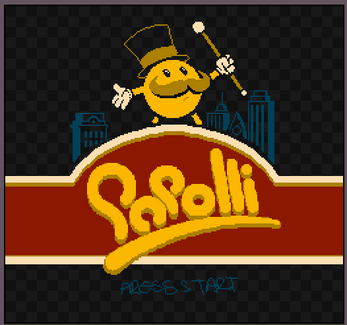